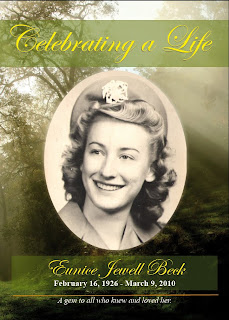 Today is my Grandma Jewell's funeral. I'm wearing a purple shirt, the light purple strapped watch I bought my grandmother (purple and pink were her favorite colors), some black slacks, and a black sweater. I'm also wearing some of the costume jewelry my aunt gave me after my grandmother passed. It comforts me to know it belonged to my grandmother.

I'm not sure what I'm feeling at the moment. I've used Facebook postings as the vehicle for my all too public grief, but I hope that that grief was seen more as a celebration of the life that my grandmother led. I want to thank each and every one of my friends for allowing me to grieve that way and for posting such nice comments. I know death is usually something we keep wrapped up and deal in our own way, but I wanted to share her because nobody else will ever know her again.

I think about all her travels and all the people she has met. Anyone who ever met her was charmed. She has probably touched SO many lives but they don't know she's gone. I designed a funeral program for my grandmother. It is a 5 inch by 7 inch booklet, and I regret that there were some typos in it, so for that, I beg the family's forgiveness. I want to reproduce the text here in my blog in its entirety.

E. Jewell Beck was born as Eunice Jewell Bennett in Manchester, Alabama into the loving arms of her father and mother, M.E. and Annie Lou Bennett, on February 16, 1926. Jewell, as she liked to go by, was one of 13 Bennett children. They grew up close to nature and the Lord. She and her siblings helped their parents grow and harvest most of the food they ate, and she was no stranger to hard work.

When Jewell graduated from Curry High School on May 8, 1945, she enlisted in the Cadet Nurse Corps. She traveled to Nashville, Tennessee to begin nurses training. It was her second time out of the state. She graduated in June 1948, with a Nursing Diploma and an Associates Degree in Nursing Science and a desire to see the world.

In 1948, Jewell was engaged to be married to Richard Griffith, and worked as a surgical nurse at Walker County Hospital in Jasper, Alabama. She was married at her parent’s home on December 24, 1948.

When Richard was discharged from the Army in 1949, they moved to Los Angeles, California. Their first son, William Emmett Griffith, was born on September 25, 1949.

Richard and Jewell moved to the City of Orange and bought their first home there.

While living in Orange, Jewell worked with Dr. Grahm Gilmore for 14 years. She was the go-to person when children were sick or injured in the neighborhood. Richard became a police detective for the City of Orange.

Jewell was a loving and adventurous mother who was not only interested in but interesting to her four children. Jewell took her children hot air ballooning, vacationing all over the country, including two favorite places Palm Springs and Mexico, took them regularly to the beach, and a rock concert or two.

Jewell’s children characterize her as a tender mother who never raised her voice to them. While sometimes working two jobs, Jewell still found the time to bond with her children, whether it was teaching her daughter Kathy to sew, taking tennis lessons with Tina, scouting with Bill, or baseball with Mike, she always found the time. She even sewed her childrens’ clothing and costumes.

Jewell continuously sought to improve herself through education. Jewell earned her Bachelor of Science Degree in Nursing Science at Long Beach State University in 1971.

In 1976, she earned her Masters Degree in Human Resources Development from Redlands University, California, and in 1978, obtained her Masters in Psychiatric Nursing, and joined the faculty at UCI Medical Center.

Jewell was able to visit almost every state in the continental United States. She traveled by plane, automobile, and motor home. But Jewell also had the opportunity to travel the world.

In 1971, Jewell and Richard were recruited to join the staff and crew of Chapman University’s “World Campus Afloat,” an ocean liner that sailed from the west coast of the United States around the world for a semester at sea. Jewell served with a medical team of two nurses, a surgeon, and a dentist in the ship’s hospital on the return home. She often said the Ports of Call were more than she could recall.

In 1979, Richard died following a long illness with cancer.

In 1979, Jewell was granted a sabbatical and went with a group of psychiatric nurses and physicians to Russia to observe psychiatric practices there. They were given guided tours of Moscow, the Red Square, the Kremlin, Ibilisi, Yerevan, Azerbaijan, Baku, Kiev, and Leningrad.

In 1980, Jewell traveled to visit her sister Ann and her husband Sergeant Major J.W. Frye in Germany, and they traveled around Europe for two weeks.

In 1982, Jewell went to China with a medical group to witness acupuncture, herbal medicine, and a close up observation of the “barefoot doctors” of inland China. She walked the Great Wall of China, and traveled to Shanghai, Peking, Hong Kong, the Philippines, and the Hawaiian Islands before returning home.

In 1983, Jewell went to Kenya, Africa, with a group of nurses to tour hospitals, and flew with flying bush doctors to remote areas of Kenya, often witnesses both modern and primitive medical practices.

In 2002, Jewell once again traveled to England, France, Ireland and other places in Europe with her Red Hat Sister, Ruby.

Jewell joined the Red Hat Society in 2001. The Red Hat Sisters say, “We are the women in the red and pink hats. We are the ones enjoying life to the fullest, no matter where we are or what we are doing! We are the mothers, daughters and grandmothers of society. Some may ask, ‘What do you do?’ The answer is... We do exactly what we wish to do.” Jewell lived every word of that saying. While in the Red Hat Society, she walked in parades, traveled to various cities and locales in Southern California, participated in social functions, and loved her Red Hat Sisters.

In 1986, Jewell met Kenneth R. Beck, the widowed father of two young physicians. She retired and married Ken on January 7, 1987. Ken was a Retired Marine Corps Pilot who served in World War II, Korea, and Vietnam.

Jewell sold her house and moved in with Ken in a house in the North Tustin area of Orange County. In 14 years, they rarely spent a day apart. He was with Flying Tiger Airlines for 12 years, and then became the Executive Pilot for the Owner/Publisher of Knight-Rider News Service/Long Beach Press Telegram. Jewell accompanied Ken on many of his flights, and was his co-pilot both in and out of the skies.