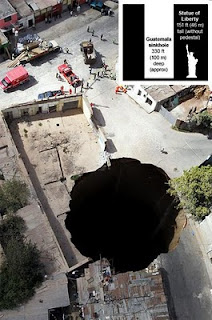 And she tried to keep them safe:
She wanted to extend roots to tie her mass together
But they paved over the ground and put up buildings
So no tree nor bush could weave its way down
Her aged skin had formed layers that had
Taken millions and millions of years to harden
But they eroded her with pipes that led to nowhere
And drains that force fed her the soup of uncivilization
She could not shut her doors nor close her windows
She could not turn away from the storm
And she had nowhere to hide from the winds and water

The firmament shook and still they had no inkling
That their Mother Earth was failing
Until finally, under the strain of her burden, she collapsed into herself
She, the practiced magician, who could call forth trees
And could paint the landscape with flowers
She, who defiantly twirled around the sun
And boasted of eons in existence
She could not pull the floor from underneath them
In the simplest tablecloth trick, and keep the buildings intact
Her leprotic flesh, insensate to their touch, crumbled
And their storied heights tumbled into the her depths