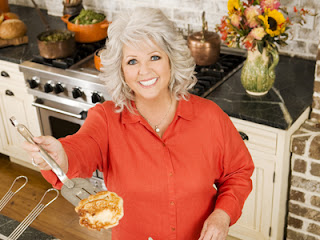 I think it's awful that Paula Deen has known for three years that she had diabetes and never once told her viewers. The types of foods she cooks with all the fat, butter, lard, cream, etc. is not the way a person with diabetes should eat. It was her food that led to the weight that led to her Type-2 Diabetes. As long as your body is still producing insulin, Type-2 diabetes can be "resolved."

When I was diagnosed with Type-2 diabetes in 2004, my morning blood sugar was 210 (that's bad by-the-by). I was put on three drugs: metformin, avandia, and Byetta (synthetic gila monster saliva!). Shortly thereafter, I changed my diet, stopped buying flour tortillas, stopped drinking sodas, and sweets. I lost weight, and I've been at a normal blood sugar (no pills) since 2008. I was overweight then, but as you all know, I'm still working on it. I never want to go back to injecting myself with Byetta or testing my blood sugar on my fingers at work before lunch.

When Paula Deen went on Dr. Oz last month, she never once mentioned her diabetes - just her smoking. As a diabetic, smoking makes it three times as likely for her to develop heart disease, messes with her blood sugar levels, lowers good cholesterol, and can cause blood clots.

As someone who has had diabetes and no longer has it, I feel that it is Paula Deen's responsibility to change the way she cooks and the types of foods she promotes so that the people who follow her will understand that healthy food CAN be good food. It can be just as scrumptious as her other meals. No one has to lose their limbs, lose their vision, or lose their life because they don't want to change their diet. She has a public forum to be an advocate for health, and it's sad that she hasn't declared she's changing her act. She only states that her viewers need to practice moderation. What a load of crap!

Pssst . . We can still see your real names!

September 25, 2015
Charlotte Proudman, a barrister in human rights law and feminist legal activist ( Pittman, 2015 ), is facing backlash over her public shaming of a man who complimented her looks in response to a connection request on LinkedIn.  She posted screen shots of his compliments on her looks to Twitter and invited public comment.  This brought to mind a post I wrote on September 19, 2014,  Pssst . . . We can see your real names on LinkedIn comments!  regarding some of the unprofessional and shocking comments posted by professionals on LinkedIn articles.  LinkedIn is not anonymous and everything we comment, write, message, or post is attached to our name. Personally, I would not have reacted as she reacted. At the very least, I would have redacted his personal information from the screen shots of his message.  But that doesn't mean she is wrong. She was very brave and willing to accept the consequences of her actions. My post, while not as brave, hopefully helps further the discussion.
Read more